Sun Microsystems' own OpenSolaris distribution, OpenSolaris 2008.05, has been available for download for almost 3 weeks on the new web site www.opensolaris.com . Finally I had some time to test the Live CD on my Toshiba Tecra M2 notebook computer.

I have been monitoring this effort (project Indiana as Sun calls it) from the beginning - so, I'm not surprised to see the Ubuntu like graphical interface. I spent very little time checking what is working and what is not. I'm quite impressed with the Network Auto-Magic (NWAM). It worked out of the box. NWAM detected the available Wi-Fi networks; and configured the wireless network interface in the first shot. However I could not figure out how to bring up the NWAM GUI, just in case if I need to connect to a different Wi-Fi network. The workaround seems to remove the file /etc/nwam/known_wifi_nets, restart the NWAM daemon (svcadm restart nwam) and to restart the GDM session (simply logout) to see the NWAM GUI window popped with the list of available networks. If that's the case, it needs to be fixed. 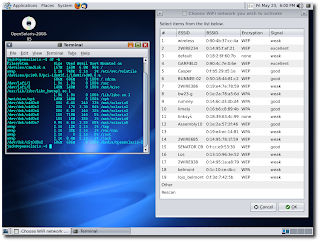 I am also impressed with the way the Live CD mounted the existing file systems on /mnt/solaris* mount points. It eliminated the need to run format and to mount those file systems manually.

The much awaited Image Packaging System (IPS) debuted in this release. There doesn't seem to be an usable graphical interface for IPS at the moment. Command line works mostly, but requires the package names to be accurate (check the image). It should be able to show the available packages even when the user searches with a partial keyword. 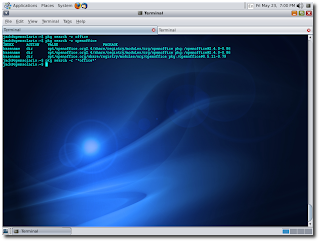 Sun is making good progress with the project Indiana. Hopefully it gets better with each and every release.

Some screenshots from my laptop with the nVidia GeForce FX Go5200 32M/64M graphic card:


Currently I have Solaris Nevada build 79 installed on my notebook computer. I'm using this laptop as my primary workstation; and I cannot afford any downtime at this time. So wiping out the existing Nevada build and installing OpenSolaris 2008.05 is not a feasible option. However it might be interesting to install OpenSolaris 2008.05 as a guest OS under xVM on the very same laptop.
________________
Technorati Tags:

In regards to your comment about NWAM, That was Phase0 of nwam. Phase1 will be integrated into a update soon that has a much improved GUI front end.
See:
http://opensolaris.org/os/project/nwam/UIDesign/Phase1/

You can file a RFE for this to be integrated at:
http://defect.opensolaris.org/bz/