Yet Another Siebel 8.0 PSPP Benchmark on Sun CMT Hardware ..

(This blog entry also serves as a summary page for all the Siebel 8.0 benchmarks that Sun published so far.)

On November 14, 2008 Sun published a brand new 10,000 user Siebel 8.0 benchmark result using a combination of T5240 and T5120 servers. In this benchmark, a Sun SPARC Enterprise T5240 server equipped with two 1.2 GHz, 8-Core UltraSPARC T2 Plus processors served as the system under test on which we ran the Siebel Gateway and Enterprise application servers. Two Sun SPARC Enterprise T5120 servers equipped with one 1.2 GHz, 8-Core UltraSPARC T2 processor were configured to run the Oracle database and the Sun Java System Web servers.

For some reason, the topology diagram in the benchmark publication document was messed up esp. the fonts -- probably the odt -> doc -> pdf conversion. The clean copy of the diagram is shown below. 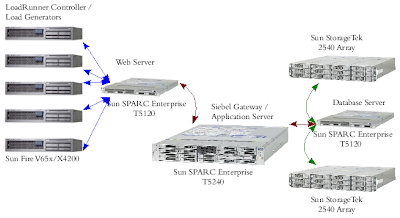 Significance of the Siebel 8.0 on T5240 benchmark

In the first benchmark that Sun published in January 2008, we showed the scalability of the application, Siebel, on T5220 systems. We were able to scale up to 5,000 concurrent users on a single T5220 system (running the Siebel application servers) with 1.2 GHz, 8-Core US-T2 processor. We've used two such systems to publish the 10,000 user benchmark in the first installment.

The goal of the second benchmark that we published in October 2008 during the T5440 server launch showcases how to consolidate multiple workloads on a T5440 server. We demonstrated it by deploying the whole Siebel Enterprise -- Sun Java System Web Server along with the Siebel Web Server plug-in Siebel Web Engine (SWE), Siebel Gateway Server, Siebel Application Server and the Oracle Database Server -- on a single Sun SPARC Enterprise T5440 server equipped with four 1.4 GHz, 8-Core UltraSPARC T2 Plus processors. We ran 14,000 concurrent virtual users against this setup to make it a benchmark publication. Since we ran all tiers of Siebel Enterprise on the same box, it is hard to compare the scalability numbers from this benchmark against the numbers that we published in the 10,000 user benchmark on T5120/T5220 servers.

In April 2008, Sun has launched the first multi-processor CMT system, Sun SPARC Enterprise T5240. T5240 holds two UltraSPARC T2 Plus processors, and is supposed to exhibit 2x performance[1] as that of a T5220. In other words, two T5220 servers can be consolidated onto a single T5240. To prove this, we re-ran the 10,000 user benchmark that we published back in January 2008 by replacing the two T5220 servers in the application tier with a T5240 server, and keeping the remaining hardware configuration for the web and database servers intact. The results from this benchmark speak for themselves - but for your convenience here is the quick summary of the results.

If you are a Sun-Oracle customer, make sure to check the Siebel on Sun CMT hardware : Best Practices web page for some useful tips.


[1] There is no unique definition for the word 'performance' -- it has different meanings based on the context.

Ramifications of the Solaris 10 kernel patch 137111

It was identified that majority of such application failures are mainly due to the applications' custom memory allocator that incorrectly returns 4-byte aligned mutexes in place of the required 8-byte aligned mutexes. In Solaris, mutex_t and pthread_mutex_t structures have been defined to be aligned on an 8-byte boundary. Both of those structures contain the upad64_t member, which is a double even for the 32-bit applications. The natural alignment of a double is 8 bytes; and per the SPARC Compliance Definition 2.4, the structures must be aligned according to their strictest member. That is, applications which create 4-byte aligned mutexes are technically non-compliant on Solaris/SPARC (for the sake of simplicity, such code will be referred to as the non-complying code for the remainder of this blog entry).

Due to a change in the implementation of the userland mutexes introduced by CR 6296770 in KU 137111-01, objects of type mutex_t and pthread_mutex_t must start at 8-byte aligned addresses. If this requirement is not satisfied, all non-compliant applications on Solaris/SPARC may fail with the signal SEGV with a callstack similar to the following one or with similar callstacks containing the function mutex_trylock_process.

Patches & the Next Steps

Note that only non-compliant 32-bit applications will be affected by the KU 137111. All other complying 32-bit applications continue to run as expected even with the KU 137111 - hence the customers, partners, ISVs and the other software vendors must understand the fact that it is not a Solaris issue. Customers running into this issue must work with the respective software vendors to obtain a patch/fix. We suggest the ISVs and the rest of the software vendors to pro-actively check their 32-bit native code for any discrepancies like the one mentioned in this blog entry.

In our testing of some of the enterprise applications, we have identified Oracle's Siebel CRM as one of the potential applications that is vulnerable to the KU 137111. It appears that IBM's Lotus Domino Server is also prone to a crash on Solaris 10 with the same kernet patch. Speaking of these two known cases, Oracle/Siebel and IBM/Lotus Domino customers (running Solaris) should approach Oracle and IBM Corporations respectively but not Sun Microsystems for a proper fix.

As it may take some time for the ISVs / software vendors to identify and fix the non-complying code in their applications, Sun is planning to provide an interim fix to the mutex byte alignment issue in the form of a Solaris kernel patch. As of this writing, we expect the fix to be integrated into the KU 137137-07. The fix is already available in the latest update of the Solaris, Solaris 10 10/08. Those who cannot upgrade to Solaris 10 10/08 from the prior versions of Solaris 10 must wait for the patch KU 137137-07.

One must note that the fix in Solaris is a tentative one that allows the non-complying code to run on SPARC hardware for the time being. There is no guarantee that the non-complying code continues to run 'as is' in the future with new Solaris kernel patches and/or major updates/releases of the Solaris operating system. So the best long term solution is for the software vendors to fix the non-compliant code before it is too late.