Chords are the basis of all music, and are the foundation of guitar. 3 or more different notes or pitches sounding {almost} simultaneously, over a period of time, can be termed as a chord. On a guitar, a chord can be played by playing 3 or more strings.

Just like any new skill, learning guitar chords takes some time. Usually a beginner {guitarist} learns playing a guitar with major basic chords. These are the easiest chords to play, requiring the least amount of effort/fingers. The most common major chords are: C, A, G, E and D -- easy to remember as the word "CAGED". These chords usually have one or more open strings, a string that sounds, but we don't put any finger on it. 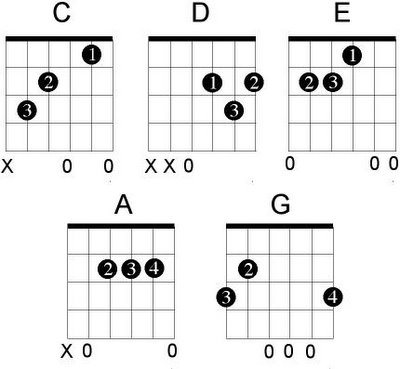